Business outsourcing: but where?

Delegate tasks to a VA and make your job easier 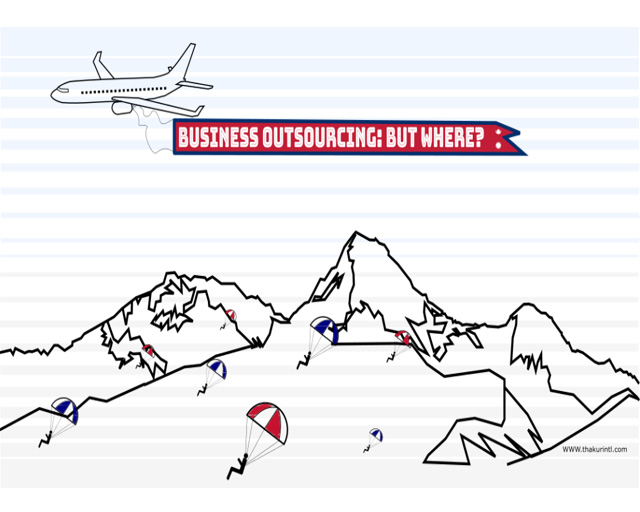 Business outsourcing (BPO) has seen a great increase in the last 10 years, being one of the solutions that many companies have adopted in response to two main factors: the economic recession of western countries after the crisis of 2008 and, most importantly, globalization. These two variables have determined a shift in the production and service systems of western countries, which have decided to relocate parts of their businesses in developing countries, in an attempt to minimize the impact of the crisis, as well as to speed up production and service provision processes.
However, many companies nowadays still frown upon the practice of business outsourcing, connecting it to the so-called “sweat-shops”, where employees are underpaid and work in unhealthy environments (especially regarding the manufacturing sector). Nonetheless, unethical practices inevitably backfire. Take, for example, the case of brands like Nike or Cadbury, whose mislead business behavior has lead to a tremendously negative mediatic response.
There is, however, another way. Business outsourcing, if done appropriately, can have an astonishing impact in your business and can also improve the macroeconomy of both countries involved, creating workplaces, improving the chances of financial growth and allowing better life conditions for the workers of both parties. This can help rising economies, such as Nepal’s, to enter the market and implement its highly promising human resources.


What is business outsourcing (BPO)?

The acronym BPO stands for “business practice of outsourcing”. An accurate definition of the term “outsourcing”, could be ‘the business practice of hiring a 3rd party to perform services and create goods that traditionally were performed in-house by the company’s own employees and staff’.
Basically, BPO is a strategy that makes the most out of the ongoing globalization of the market by relocating parts of the business abroad, usually towards countries which have a lower cost of living, therefore, reducing significantly the capital allocated to perform specific tasks.

Additional benefits that business outsourcing can bring to your company

Relying on business outsourcing as a strategy for your business has the immediate benefits of reducing the amount of budget you allocate to specific tasks. The underlying mechanism is based on the difference of salary between the country that decides to outsource and the country that is providing the outsourced services. For example, the average monthly income of an urban Nepali household is approximately $250 (that is €220), whereas, in countries like the United States it is tenfold,  at around $2400/month (corresponding to circa €2100).
It is easy to bring forward the argument that Nepalese workers are underpaid, but this line of reasoning fails to consider the difference in the cost of living between the two countries and the purchasing power of the currencies. Having taken these two factors into consideration, a Nepali worker in the field of, let’s say, IT, receives a high wage for Nepalese standards.
It is therefore evident that business outsourcing represents a smart strategy to save money, but its role does not end here. In the day-to-day life of a business, relocating non-core tasks such as administration, marketing, customer management, back-office and others, can significantly speed up those processes and will allow in-office employees to focus only on core tasks. This translates into more efficiency and thus into an increase in revenue.
An increment in profits is certainly appealing to most businesses, but outsourcing is still raising questions among those cautious investors who believe that businesses should be kept in-house at all costs. If this is true for core functions, whose outsourcing could bring a competitive disadvantage of your business, non-core functions should be relocated in the prospect of business growth.

The impact of outsourcing on developing countries

The effects of business outsourcing are more profound than one would expect. In spite of a general scepticism for the practice, many accredited economists believe that outsourcing makes things more efficient in the long run.
Not only is the business in the home country benefiting from higher revenues and lower costs (with the possibility to invest them in a further expansion of the business), but the developing country in which the business is outsourced experience a new and impressively strengthened creation of workplaces. In other words, BPO is advantageous for both parties.
If we focus primarily on the destinations of outsourcing, they are seeing a specialization in sectors, allowing them to invest in given fields and in the formation of highly qualified personnel. This, in turn, will ensure that these countries will eventually become the hub of a particular activity, a go-to place that will ensure high-quality and innovative services, while both speeding up advance and lowering the costs of the services produced.

In Nepal, the polarization between old and new is progressively becoming evident. In fact, the economy of the Himalayan country is experiencing a gradual movement away from traditional sectors, such as agriculture and it is opening up to the more recent tertiary sector, involving, more specifically, information and computer technology.
While still making up about one third of the total GDP of the country and thus constituting the backbone of the country’s economy, the primary sector is leaving more space to both industry and services. 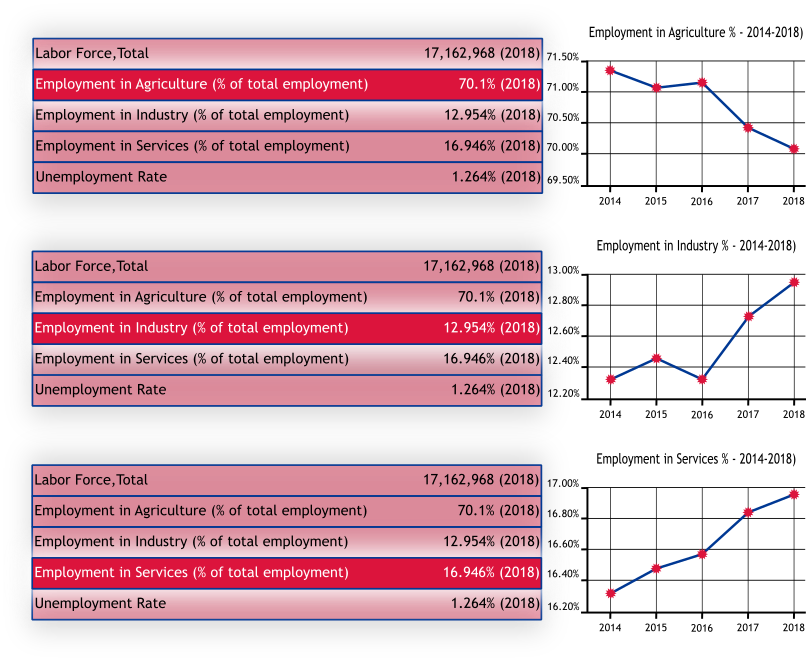 As we can see from the graphs, the employment rate in the agricultural sector has plummeted of almost 1.5% in only four years, on the other hand, industry has seen a discontinuous growth of 0.6%. Finally, services are the most promising sector, seeing a steady growth of 0.6% in the same period of time. A further expansion of the sector is to be expected making outsourcing to Nepal an encouraging solution.

Whilst Nepali Ministry of Education is pushing for a reinforcement of the local higher education system and, in particular of universities, most young Nepali students still opt for foreign institutions to get their higher education.
The preferred destination is the United States where, according to a 2017 report, Nepali students represent ‘the fastest growing international student population studying at colleges and universities in the United States’. Abroad education guarantees that the Nepali receive the most advanced and forward-looking knowledge in their field and that they become an important asset in the economy of the country.
Students look for quality education to be applicable in the tertiary sector, which further contributes to the prospect of its further expansion. In particular, the most chosen curricula are, in order of number of matriculations, engineering, IT, hospitality and nursing.
Outsourcing your business in Nepal would then ensure quality service provided by experts in the tertiary sector, an area of Nepali economy, which is seeing a rapid and steady expansion. If you are considering to outsource to Nepal, Thakur International can be a responsible company to rely on.
This outsourcing company based in Kathmandu can help your business expand, providing it with numerous services, including virtual assistants (VA) specialized in different tasks and the highly demanded telemarketing.
Opting for Thakur International ensures high-quality business outsourcing services and years of experience in the field, making it one of the most renowned outsourcing companies in the Himalayan country.